Early Years Observation in the Spotlight 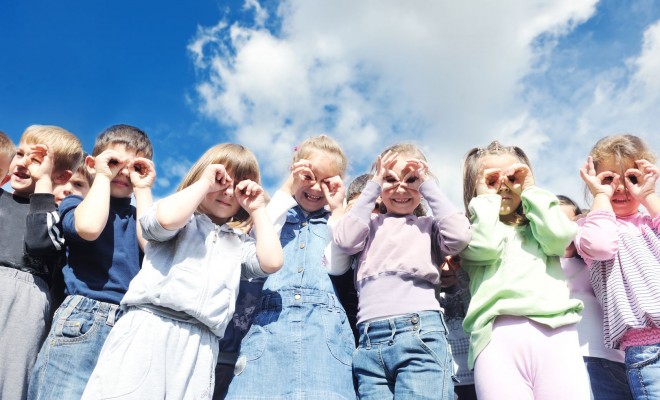 Early Years Observation in the Spotlight

In any typical early years setting, childcare professionals will be making informal observations most of the time. Except that, rather than suggesting they are conducting an observation, they might say they ‘noticed’ something, may ‘wonder’ why a child did/did not act in a certain way, or employ many other expressions to flag up significant aspects of a child’s behaviour. Such attentive and enquiring professional attitudes are also the prerequisites for professional observation. But why is formal early years observation necessary in childcare settings? And does it usually accomplish what it sets out to achieve?

What does early years observation try to achieve?

According to Solly, observations serve to:

‘… cultivate a full and rounded picture of each child and their achievements … A range of observations is also required in order to make a summative assessment of the child’s progress for the Foundation Stage Profile in the reception class … Each observation should help practitioners to plan more accurately for the individual child and for groups of children.’ (Solly, 2015)

Observation then, is the first stage of a tripartite observe/assess/plan cycle which tracks the learning and development of individual children and groups of children. Any shortcomings here thus have the potential to distort the remaining two phases. 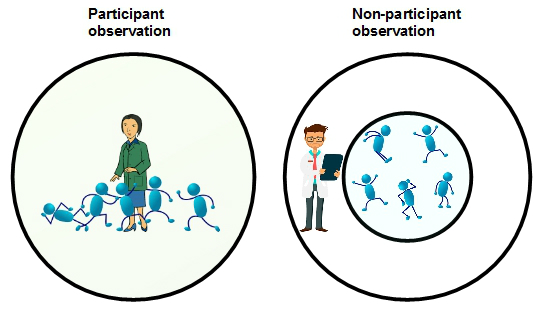 For logistical reasons, many types of observations are undertaken by practitioners who participate to some degree in the activity which is being studied. This usually means there is an established relationship between the observer and the group of children who are the subject of the investigation. While some say this can yield richer data than a detached observer can capture, for example because the observer is much closer to the action, critics may say that an ‘insider’ view of an episode can rarely be completely objective. For instance, Cohen and Mannion note that:

Thus, it at least seems fair to say that participant observer accounts are highly authentic, yet pay a price because their impartiality is compromised to some extent by a certain conflict of interest.

The validity of different modes of observation

Another aspect of using observations for data gathering concerns variations in the mode of assessment, as depicted in Figure 2 below where two separate dimensions are explored. 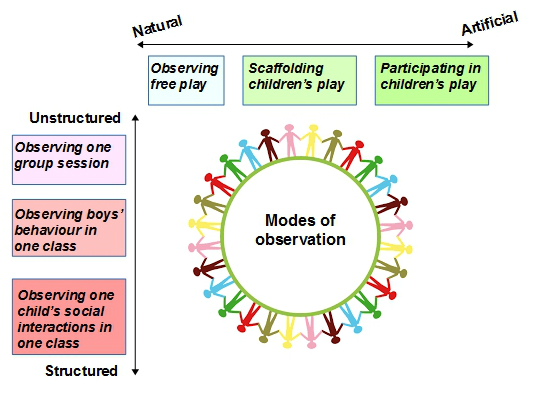 Figure 2 Modes of observation in two dimensions (Inspired by Bailey, 1978)

At the top, three different types of play observation are plotted along a natural/artificial continuum in the horizontal plane. Here it could be argued that any data emerging from episodes of free play (without adult involvement) could be considered to arise naturally from children’s play. Thus the information gleaned would be entirely genuine and highly valid. However, even skilled adult scaffolding of play (as practised in the middle example) might be judged to influence outcomes, and thus – in a sense – be considered to yield more ‘artificial’ data. Furthermore, where an adult takes part in the observed play, the resultant account would be open to even stronger criticism that the level of adult control introduced could be said to influence the findings.

Considering the structural dimension in observational studies of child behaviour, three contrasting scenarios are again plotted against an unstructured/structured continuum located in the vertical plane. The topmost study of classroom behaviour is the most open and unrestricted example in which several kinds of child-behaviour data could potentially be observed. Moving downwards, the two further observations would produce gradually more restricted outcomes – the middle study, for example, would ignore girls’ behaviour, and boy/girl interactions would presumably be outside its remit too.

Experienced professionals would (quite rightly) note that such controlled and targeted observations are often necessary for very practical reasons. Of course, that is absolutely true, but the fact remains they are more difficult to defend against accusations of bias and prejudice.

Educational staff work hard to ensure fairness is a key feature of their practice, and the fact that children (who would be the first to react otherwise) generally settle well in early years settings is powerful evidence which supports this statement.

Nevertheless, all human beings are prone to cognitive bias. For instance, ‘double blind’ research has constantly shown that, when fed prior (falsified) information that children are naughty/clever or that their parents are well/poorly educated, teacher assessments have tended to be influenced by this supposed knowledge. Thus the same group of children have often been rated rather differently, and even more importantly, their teachers have consequently been shown to have different expectations of those children in each instance.

The very presence of an observer in an educational setting can often influence the outcomes. Firstly, as research professionals know, the so-called ‘Hawthorne effect’ means that all research subjects will tend to act differently if they know, or even suspect, they are being studied. So young children in a group being observed may alter their behaviour in the presence of an adult who (unusually) appears not to wish to interact with them.

Meighan (1986) believes that none of us come ‘uncontaminated to the study, the analysis, of educational processes’, and other known observer influences include:

This form of statistical bias is most often unconscious but nevertheless can damage the validity of observation outcomes. Taking a typical survey of behaviour as an example, Figure 3 illustrates some different types of bias which have the potential to skew the process at different phases. 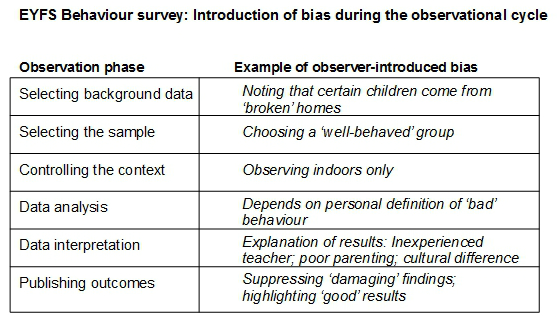 Working from the top down: knowing a certain child has a difficult home background may introduce a detection bias – where the observer is already primed to expect trouble, and may be a too hasty in attributing an instance of poor behaviour to the known feature rather than applying a more open-minded judgement.

If a certain group are chosen as the subject of a study, rather than picked at random, this constitutes a selection bias. This type of bias would also occur if the observation were arranged on a day when a ‘problem’ child was known to be absent.

Looking at the indoor context of the observation, omitting an important variable which other studies have shown to be influential (i.e. the impact of the outdoors on children’s behaviour) will inevitably distort and bias the findings to some degree.

When it comes to data analysis, staff have their own family experience, and perhaps parenting experience too. For statistical purposes, that means each may have their own subtle definition of what counts as bad behaviour, resulting in a certain analytical bias.

As regards data interpretation, observed misbehaviour can sometimes be mistakenly attributed to external factors such as poor parenting when closer investigation might reveal there are other contributory causes which may be of equal or greater importance. Even when the identified factor is largely to blame for a child’s misbehaviour, the ‘nocebo effect’ – where a confirmed negative perception is given greater weight than it actually deserves – can still misrepresent the situation.

And when it comes to publishing the outcomes of early years observation, a reporting bias can cause individuals and institutions to exaggerate the importance of good results whilst playing down the significance of poor ones.

Reducing the impact of bias

Observational bias weakens the validity of findings and can also mean that sometimes the truly important data remains hidden. Figure 4 below offers some suggestions on how best to avoid these effects.

Observation data should always be compared with outcomes gathered from a range of other sources, and by a range of other methods. In addition, it is always wise to bear in mind that there is often more than one explanation for observed phenomena, and certainly room for alternative interpretations.

The more your findings are confirmed across a range of different contexts, the more valid and reliable they become. Organisations can often use joint observations, with each researcher operating independently and comparing their observation notes (and conclusions) afterwards. Not only does this help to harmonise early years observation techniques – thus making them more reliable – it is also a very good tool for sharing good practice, as well as supporting staff training and development.

Frederickson and Cline (2009) also suggest that, particularly with important SEN observations of individual children, ‘it can be helpful to have a second adult observing the work of the classroom for a short time with a specific brief to investigate what happens from the perspective of the [child].’ Describing this method as ‘pupil shadowing’, the authors cite one particular instance where ‘another teacher interpreted various episodes during a reading activity quite differently from the class teacher.’

Asking the important question – who can be fair? Frederickson and Cline respond by highlighting the need for ‘initial training and continuing professional development’, and go on to comment that ‘working towards a reduction in bias … is a task for services and systems as well as for individuals.’
References