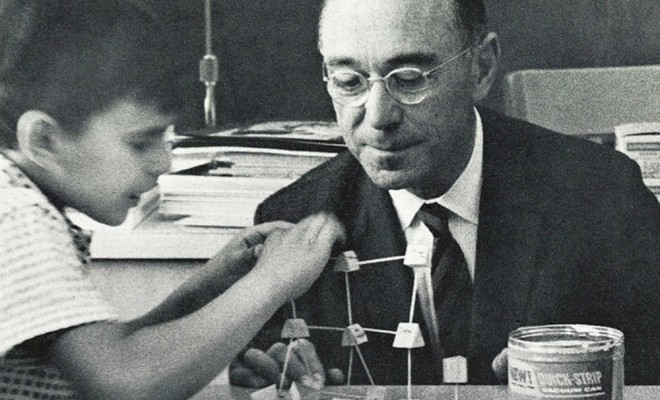 Jerome Bruner was an American psychologist who made important contributions to human cognitive psychology as well as cognitive learning theory in educational psychology. His learning theory focuses on modes of representation and he introduced the concepts of discovery learning and a spiral curriculum.

Jerome Bruner (1915-2016) regarded the aim of education as being the creation of autonomous learners who had ‘learned how to learn’.

Modes of representation are ways humans store and encode knowledge or information in the memory. Bruner’s modes are only loosely sequential.

This mode involves encoding action-based information for storage in our memory – e. g. an infant recalls shaking a rattle by developing a ‘muscular memory’ of the task.

Infants, and adults, recall tasks via muscular memory. For instance, miming operating a lawn mower is much quicker and easier than a complex verbal explanation.

This is the ability to store a mental picture ‘in the mind’s eye’. When learning a new topic, it can be helpful to use pictures and diagrams to support verbal explanations.

Symbolic (7 years and above)

This more-sophisticated mode is the last to develop and is more flexible than the previous two modes. Mostly via the medium of language, information is stored using codes and symbols. For example, ‘dog’ is a symbolic representation of a certain class of animals.

Such symbols can be manipulated, sorted, classified etc., so the learner is not restricted to using only actions or images. Data storage is accomplished via words, mathematical signs and/or other symbol systems.

This constructivist theory implies learners (even adults) should tackle new material by progressing from enactive to iconic to symbolic representation. Another implication is that even very young learners are capable of learning any material, provided it is appropriately organised to match their current level of ability.

Bruner believed all children were capable of grasping complex information: ‘… any subject can be taught effectively in some intellectually honest form to any child at any stage of development.’ This idea underpins his concept of the spiral curriculum – structuring information to first teach complex ideas in a simplified form, and then later re-visiting them in a more complex form. All subjects would therefore be taught at gradually increasing levels of difficulty.

Bruner also developed the concept of discovery learning in which learners construct their own knowledge for themselves. In his view, discovering information was a more effective way of learning than just being told by a teacher.