The Importance of Group Play for Early Years Children 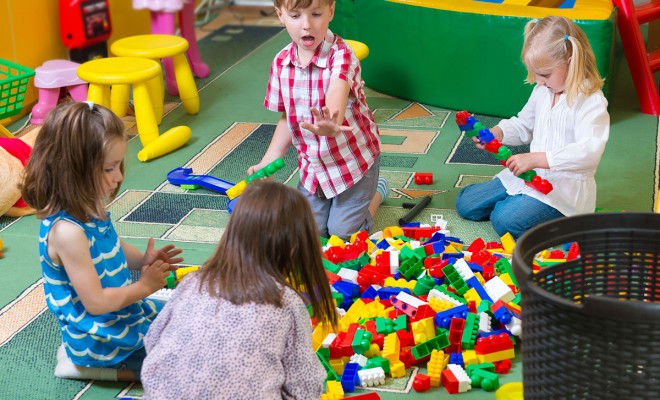 The Importance of Group Play for Early Years Children

Play is a natural mode of learning for early years children, and indeed the default mode for the very youngest. Therefore it’s no surprise that preschool settings are equipped and organised to facilitate such activities. And given that children attend in numbers, there are plenty of formal and informal times when they are engaged in group play. Whilst there is little doubt this is highly enjoyable for all participants, discovering the extent to which they really interact with each other on these occasions, what they gain from the experience, and what childcare professionals can learn from observing this dynamic process, is a more complex and challenging task.

Theories of play acknowledge that the play experience changes as a child grows and develops. Thus individuals who participate in group play with children of different ages will have different expectations and may thus be expected to react to the experience in different ways. Sociologist Mildred Parten studied children’s play in the 1930s, and the six phases of play she identified (see Figure 1.1) still provide practitioners with a useful means of describing and categorising different forms of play, as well as offering some useful evidence about a child’s developmental progress. 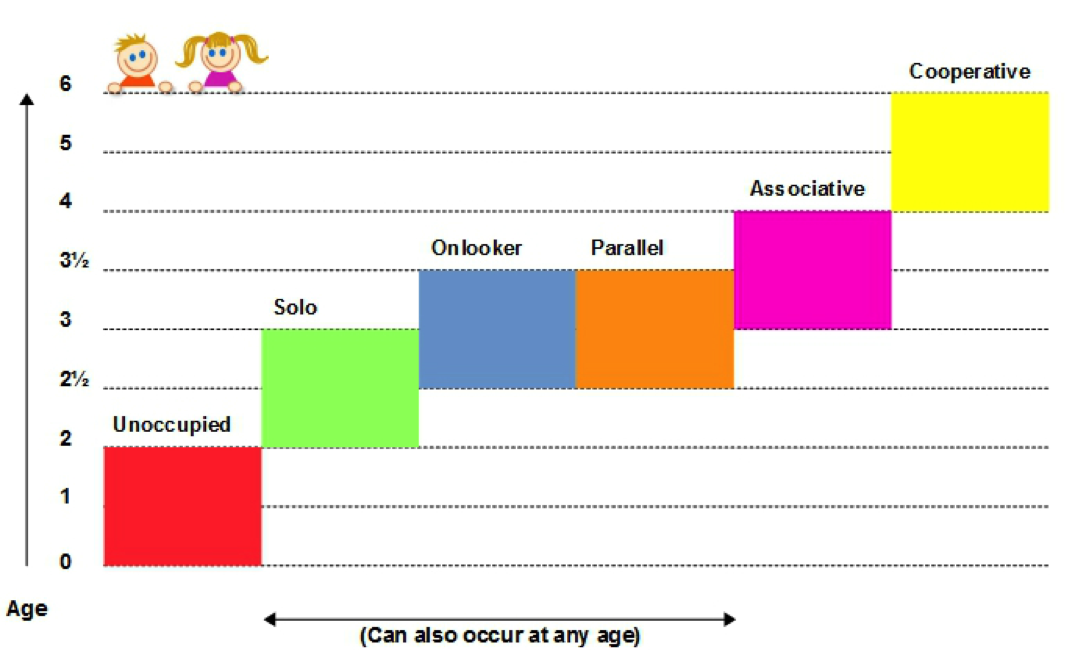 For the child under two years of age, ‘unoccupied play’ is largely isolated and sensory. At this time the infant, who may often seem somewhat passive, is gathering important benchmark information and experiences which will later be deployed in more active play. Then from around the age of two, young toddlers begin to use ‘solo play’ as a form of entertainment. Though they may be in a group setting, there is little to suggest they are aware of other playmates.

‘Onlooker play’ commonly emerges a little later when the child is around 30 months. Here, the child clearly observes others playing, and may talk about what is happening in the play, but makes no effort to actively participate. Parten also identified ‘parallel play’, which usually occurs at much the same time as onlooker play, defining this as a side-by-side activity which may involve mimicry and choosing similar toys. Though there is no communal engagement, this is an important precursor to fully interactive play.

From around age three upwards, play becomes more overtly social as the child joins with others in ‘associative play’. At this stage children engage, communicate, and begin the process of learning how to negotiate and get on with each other. By the age of four children are usually ready to begin ‘cooperative play’ which can involve acting together as a team, showing deeper interest in their peers, striving towards a common goal, and many more joyous social and group initiatives which define late-stage early years children.

It should be observed that, as with all elements of child development, these play phases can appear earlier or later, and as the above graphic also notes, some types of play may persist and recur at any age. Nevertheless, the important point is that any seemingly homogeneous preschool group engaging in group play together will almost certainly contain children whose play will be at different phases.

Joining a group can be a challenge for anyone, least of all a young child with under-developed social skills. Figure 1.2 below depicts Schutz’s conceptualisation of interpersonal relations which casts the task of becoming a member of a group as a three-step process involving inclusion, control and affection:

Figure 1.2 A developmental model of interpersonal relationships (Inspired by Schutz, 1958)

This model suggests a hierarchy of needs which face a young child as they begin the process of ‘fitting in’: Above all, Schutz believes, the child needs to be recognised as one of the group. Once that is achieved, they will need to know which group members are the ones who make and/or enforces the rules. And finally, they will then want to feel valued in some way to set the seal on their group membership. For those facilitating group activities, this can be a helpful way of viewing some of the difficulties children experience in a group context.

Social relationships within the group

Considering the elements of inclusion, control and affection in more detail, Schutz developed a more sophisticated model – his Matrix of Relevant Interpersonal Data – to define the different roles adopted by group members (see Figure 1.3 below).

This creates a sociometric tool for interpreting the actions of group members and making a quantitative assessment of the degree to which a child exhibits the social behaviours listed in the left-hand column. For instance, a child’s ‘expressed inclusion’ measures the extent to which he personally tries to engage and interact with others. The right-hand column suggests that where his effort is very high he might be described as “oversocial”, whereas if he rarely employs this behaviour he might be rated as “undersocial”.

Working systematically through the matrix creates a profile of the way a child participant acts and feels, which again helps to develop a clearer picture of how he behaves in a group setting, and may also offer some reasons why this might be so.

Delving a little further into the concept of the group as a social network of relationships, Moreno’s development of the sociogram (illustrated in Figure 1.4) gives a further perspective on how group dynamics operate. In his research on social contacts in a group setting, Moreno used descriptors based on the preferences expressed by group members. One or two very popular individuals, or ‘stars’, seemed to be liked by everyone, whereas at the opposite end of the spectrum, there were ‘isolates’ who were rarely chosen at all. In addition, a mutual attraction was noted in the case of ‘pairs’, with the same criteria responsible for the creation of ‘triangles’. 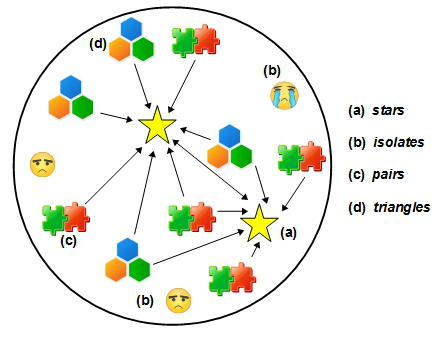 According to Marques, those isolates shunned by everyone in the group are doubly disadvantaged by the ‘black sheep’ phenomenon whereby ‘… someone who is socially undesirable (unlikeable) is liked less if he or she is a member of your group … than if he or she [were] a member of a group to which you do not belong.’ (Marques, 2016)

The sample sociogram given above is necessarily less complex than the relationships formed within an actual group, where, for instance, there may be extra layers of contact between the identified elements. In addition, it is appreciated that where younger children are involved it will probably be best to base the data on observations rather than trying to ask questions about preferences. Nevertheless, the method reflects the social landscape of a group and its composite sub-groups in revealing ways – for instance, practitioners may find the nominally “brightest” children are not always automatically rated as stars. And whilst some may see a sociogram’s output as ‘stating the obvious’ about group relationships, it can be an invaluable tool to determine what happens when changes occur, to track the varying perceptions of different members of staff, and as a fail-safe mechanism to address and prevent the social isolation of an individual child. 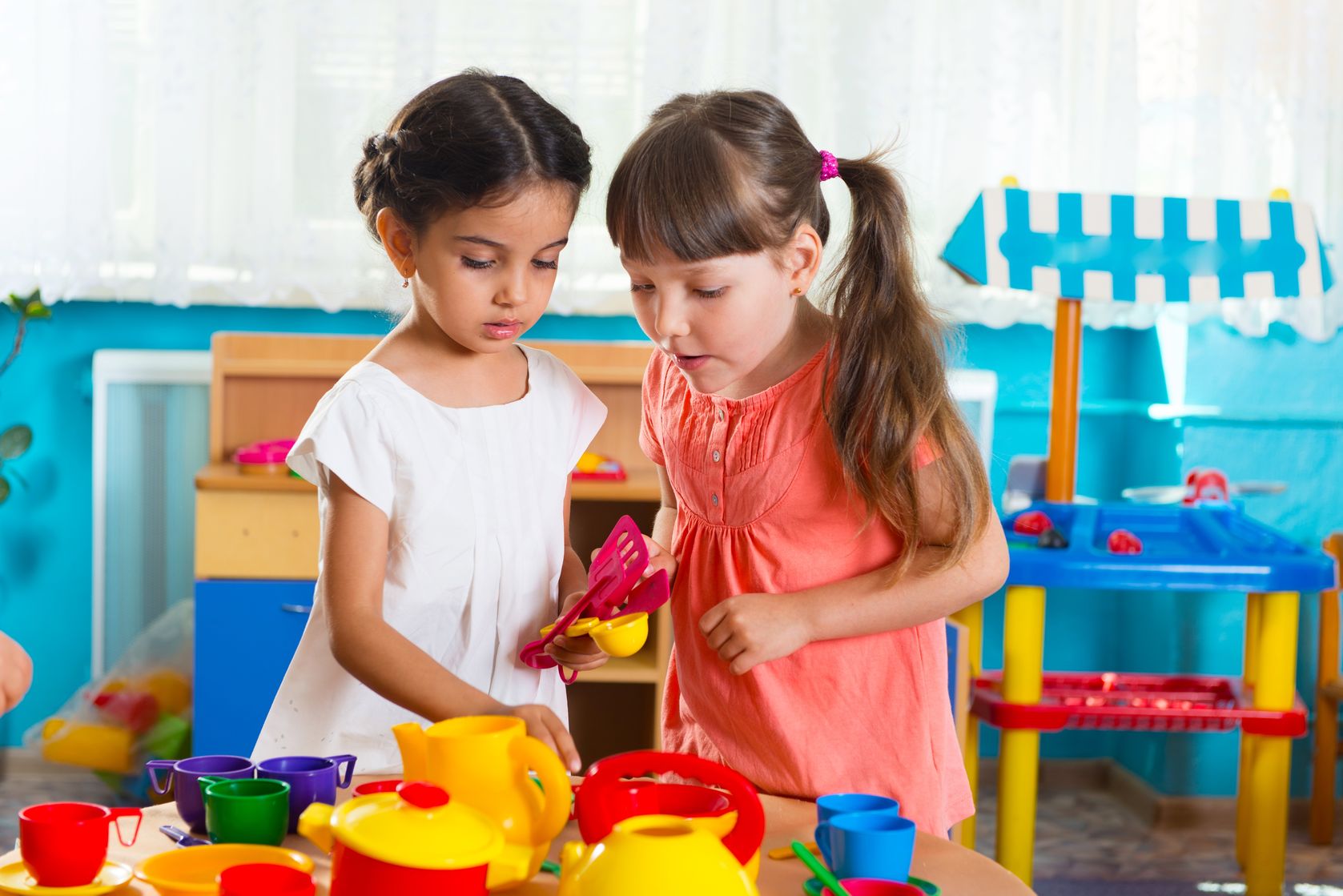 Most adults and experienced childcare professionals understand that the occasional conflict is to be expected as children invariably develop their social skills at their own pace. And even though there is a tendency to base conflict resolution on the doubtful assumption that all conflicts occur between ‘equal partners’, this article highlighs the fact that many conflicts in early years settings happen because there is a developmentally inspired mismatch in children’s expectations. For example, a child engrossed in solo or parallel play may resent the intrusion of another child who simply anticipates an associative play encounter.

Where conflict does occur, Finch and Wirtanen (2000) observe that, far from ‘considering conflict among children frustrating’, the practitioner’s role in peaceful conflict resolution should be to:

The authors believe that achieving the desirable aim of calm resolution is ‘supported or hindered’ by the stance a practitioner adopts:

Finch and Wirtanen identify careful preparation as the key, and recommend four strategies the ‘prepared teacher’ may selectively choose to apply, as illustrated in the diagram below: 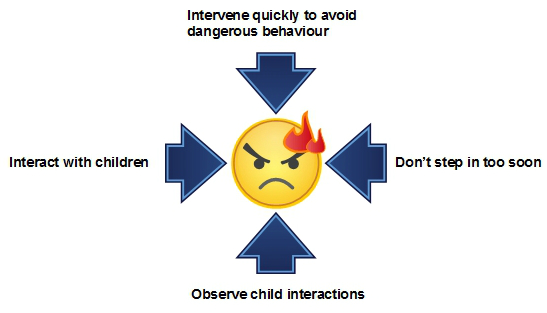 Professionals will note that not every conflict strategy involves intervention, and that the above model implies a range of actions to suit different circumstances. In addition, the group play environment itself can be varied to take advantage of the different experiences offered by organising the activity in several forms. For instance, the BTEC module on ‘Promoting Children’s Development Through Play’ contains the following diagram which illustrates three modes of structuring children’s group play: 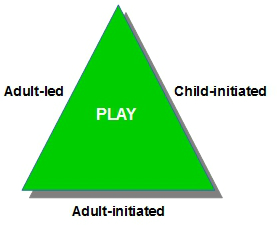 In the same context, a report by the Organisation for Economic Co-operation and Development (OECD) on pedagogical practices in early years settings in England interestingly concluded that ‘… research indicates that child-initiated practices can boost socio-emotional development, while adult-led practices may have benefits for academic learning.’ (Wall et al., OECD, 2015).

This gives a clear endorsement of the rich potential of child-initiated play – ‘in which children choose what and how to play and who to play with’ – to promote endless opportunities for social learning during group play, whilst also freeing up staff to observe and note the resultant interactions which help to track and identify the important milestones of child development.

If you’re looking for some practical ideas to use in your setting, read our article on Imaginative Play Ideas for Early Years. For tips on how to equip your setting to facilitate this type of play, see Learning Through Play: A Productive Playing Environment.
References