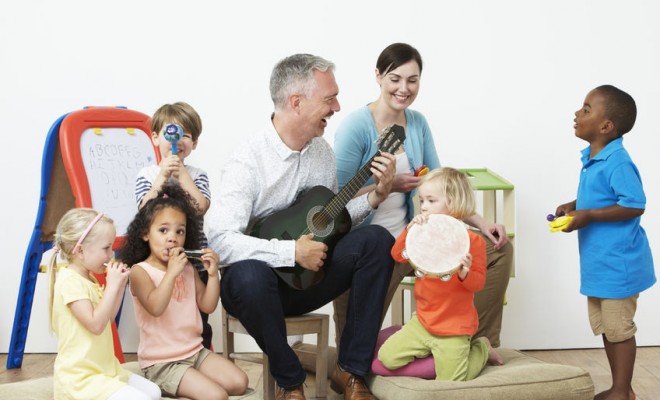 This simple classroom guitar guide is aimed at those who do ‘a bit’ (or a lot) on guitar and are curious about how you might best use it in an early years setting. There are real advantages to using an acoustic guitar with young children – it’s warm, welcoming, inclusive, and never too loud and overbearing. You can play while sat among the group, sitting out front, and even walking about if you’re a more confident player.

Below is a list of 20 familiar nursery rhymes/ children’s songs which can be accompanied with just two chords. In addition, there’s a suggestion about the ‘key’ of a song (and therefore which pair of chords will apply).

A word about chords

Use basic strums which will make it easier for the class to hear the words when you sing. Playing chords well requires patience and practice. The three pairs of chords shown in the chart below are the easier ones to attempt first.

The numbers refer to the left-hand fingers you should use (e.g. 1 = the index finger, 4 = your ‘little’ finger). A zero means that the string indicated should be allowed to ring out without any left-hand finger on that string (= an ‘open’ string). And those strings with an ‘x’ above must not be sounded in the chord at all.

One very easy song is ‘Ten in the bed’ – which only requires one G chord to be played all through. Those who find even one chord tough could just strum the four highest (thinnest) strings – which means you can then get away with holding down only one left-hand finger!

Practice a basic strum pattern as shown below – but use your own pattern if you prefer (and know what you’re doing). Always keep the guitar accompaniment fairly soft, just shadowing and supporting the voices:

Right from the start, you should aim to bring the song to life.

Please don’t settle for ‘performing’ a song – tell the story, and make it fun for everybody by adding some “extras”. This also allows the singing and music-making to be only one part of a broader experience. That also takes pressure off you and adds interest for everybody, making the whole thing more inclusive and interesting.

What you can do is only ever limited by your imagination, but some options might be:

Instruments you could use:

Working alongside one or more adults expands the possibilities, and makes performing the song even easier (just rehearse a few times first, so you all know what you’re doing). Select the ideas that suit your style and your children.

For adults, the aim should always be to do simple things well so you can focus on putting the song across and helping to make it all really meaningful for the kids. Having fun is mandatory, all the rest is optional and limited only by your enthusiasm!

Read more about the benefits of music therapy in early years.

Below is one of many sites where you can find words and chords for popular songs such as those listed above. More importantly, this information will provide you with a musical map detailing the points at which your chords should change.