The Benefits of Music Therapy 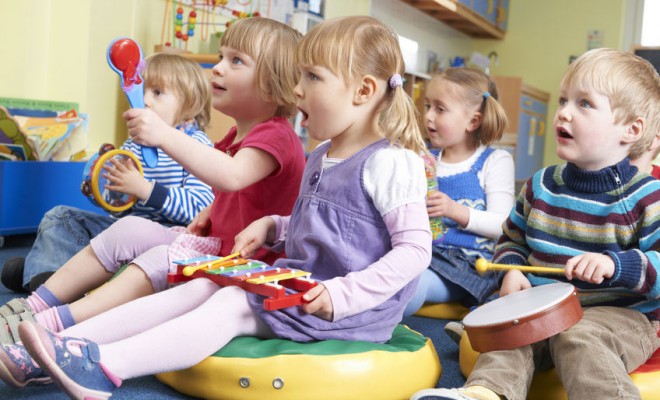 The Benefits of Music Therapy

Hans Christian Andersen once said that “Where words fail, music speaks”. Practitioners of music therapy will surely have a deeper understanding of those words than most of us. Because they are the ones whose life is spent using the power of music to unlock the potential of the human mind and body to respond and heal itself, often where conventional therapies alone are insufficient or need a helping hand.

An ancient accompaniment to the rhythms of human life, music’s magic – like many other forms of natural healing – has been in use far longer than it has been understood. A non-verbal form of multi-sensory experience, which is processed in both brain hemispheres, many would agree music is perhaps at its most powerful when used with developmentally impaired young children as a universally motivating source, helping them to connect with people and expand their lives to encompass new dimensions.

The use of music for healing has a long history which goes back at least to Ancient Greece. Here the Greek deity Apollo was known as the god who ruled over both music and medicine – it is thus perhaps no coincidence that a considerable number of our present-day musical terms also have a parallel medical usage (see a small sample in Figure 1 below). 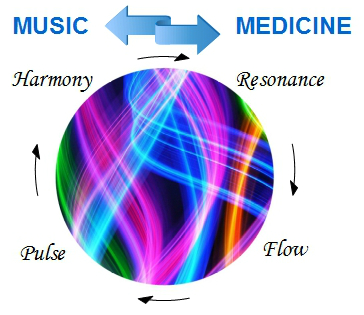 Plato linked music with the emotions, and Aristotle held that music was a purifying force which affected the soul. Ideas of using music to bring the body and soul into harmony, especially to banish melancholy, also developed across various cultures and persisted in Europe until the early eighteenth century. And by 1807, works such as ‘Der musikalische Arzt’ (The Musical Doctor) by Peter Lichtenthal, a musician and physician, were advocating the benefits of neural stimulation which could be achieved by administering doses of music therapy.

The beginnings of modern music therapy in the UK can be traced to the employment of live musicians to offer a treatment for hospitalised soldiers suffering from emotional and physical trauma sustained on the battlefield during World Wars I and II.

What is Nordoff-Robbins Music Therapy?

Musician/educators Paul Nordoff and Clive Robbins developed a form of creative music therapy in the late 1950s which has since enjoyed international success. This approach involves an ongoing collaboration between the child and the practitioner who jointly create and perform music together.

The Nordoff-Robbins philosophy holds that, regardless of the participant’s level of musical ability, active involvement can still be achieved and the ensuing musical experience will always be beneficial. Trained therapists use a broad range of techniques and work with children with disorders spanning the whole spectrum of special educational needs.

What is Orff Music therapy?

Devised at Germany’s Kindezentrum München by Gertrude Orff (at the instigation of pediatrician Theodor Hellbrügge), this method embraces the medical philosophy of social pediatrics and is also heavily influenced by the principles of Orff Schulwerk, a music education system formulated by German composer Carl Orff. Hellbrügge’s concern was that a purely medical response to the needs of children with complex developmental problems was of limited benefit. So during the years after the Second World War this therapy evolved to support the emotional development of child patients and was reinforced by input from a child’s parents and a range of other mental healthcare professionals.

The Orff concept values holistic musical experiences involving a mix of words, sounds and movements, and uses a broad range of instruments including keyboards and a varied array of percussion. Musical interactivity includes not only playing but also playful improvisation to create engaging stimuli for further exploration. At a basic level this might, for instance, include simply enjoying the delightful aural results obtained by rolling a marble over the bars of a xylophone, feeling the vibrations of a deep resonant note played on a cello, or just moving in response to a captivating piece of music.

Orff sessions emphasise the social aspects of each encounter, and build a child’s self-esteem by identifying and developing what a child can do well just as much as addressing any problems which exist. Two important Orff principles a therapist will follow are: ‘responsive interaction’ – which means accepting the child’s ideas and being prepared to interact with the child at the level these imply; and ‘provocation’ – whereby the therapist is always ready to introduce appropriate new ideas and initiatives into child/therapist interactions in order to adapt and refine the course of the therapy to produce optimal results. It is very common for parents to observe or even participate in Orff music therapy sessions to nurture parent/child relationships and to support the continuity of therapeutic benefits at home.

The Bonny Method of Guided Imagery in Music

During the 1970s, Helen Bonny, a music educator and therapist, developed a music-centred transformational psychological therapy now known as the Bonny method of guided imagery in music. This approach uses specially chosen sequences of (usually) classical music to generate a range of inner experiences which the participant has the opportunity to hear and work through in the company of a therapist. Unlike other music and imagery techniques, the therapist does not offer any suggestions to guide this listening experience. Instead, this method regards the music itself as an important ‘co-therapist’. Thus the role of a Bonny therapist in these sessions is to observe, facilitate and support the musical interaction as it takes place.

The Bonny experience has been likened to hypnosis and other forms of altered consciousness in which the participant explores inner images and emotions associated with the unconscious mind. Thus Bonny techniques are often used with children as a means of exploring grief and loss, or to unlock complex traumas following abuse and neglect. Guided imagery therapy can be conducted with groups as well as in one-to-one sessions, and using this approach for children with autistic spectrum disorders has been found to decrease hyperactivity and stereotypical behaviours, improve attention spans and the ability to respond to instructions, as well as generating more child-initiated verbal and non-verbal communications.

What Happens in a Music Therapy Session?

Though each music therapy context is naturally unique, the following extract gives a flavour of what might be expected from a music therapy intervention:

‘Three young children with autism spectrum disorders sat expectantly in a semi-circle … To begin the session the music therapist presented a picture schedule of what was about to happen.

The first picture showed it was time to sing “Hello.” Aiden waved when it was his turn, maintaining a skill he had recently mastered. Candace answered “Hi” after her teacher prompted her. Jordan waited patiently for his turn, swaying from side to side with the beat, but when he heard his name he could no longer contain himself. He jumped up and down during his turn, singing “Hello” at the appropriate time in the phrase and clapping at the end of his verse …

For The Bear Went over the Mountain the music therapist distributed boomwhackers, large plastic cylindrical instruments, asking each child to name the colour he/she wanted. She started tapping the floor with her boomwhacker to establish a steady, organised beat; encouraged the children to join her; and then proceeded to sing. At the part about the bear going over the mountain to “see what he could see,” she invited everyone to look through their boomwhackers and see small stuffed animals. Opportunities occurred to answer questions about animals … a cat, a horse, a bunny.’ (Kaplan, 2012)

The Results of Music Therapy

Music therapists are trained professionals who will conduct a comprehensive assessment of each child prior to any engagement, and will also be happy to collaborate with other agencies. The British Association for Music Therapy (BAMT) notes that using music as a tool to promote communication and expression, therapy sessions can positively impact upon self-esteem and sense of identity as well as communicative abilities and social skills. The BAMT also add that:

‘Although music therapy does not directly teach musical skills, it contributes to musical development by encouraging:

– Awareness of pitch and rhythm

Clearly, such outcomes will boost a child’s educational prospects in non-musical areas too, and the BAMT have also gathered a body of published research evidence which demonstrates that music therapy can:

In conclusion, it seems important to point out that, although music therapy is of course primarily intended to offer relief to children with impairments, engagement in music-related activities has multiple life-enhancing benefits for every child. Furthermore, some of the activities touched upon here would also be appropriate to use in a variety of everyday childcare settings.