What is Autism & an Autistic Spectrum Disorder 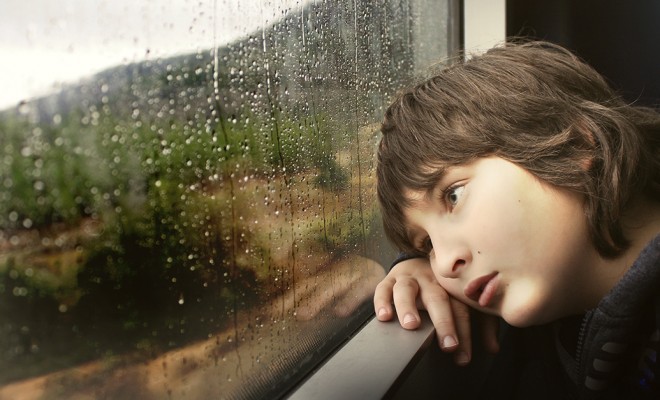 What is Autism & an Autistic Spectrum Disorder

Society’s fascination with the talents of autistic-savants has been selectively influential in raising awareness about an autistic spectrum disorder (ASD). Pioneering Cornish physician John Langdon Down was the first to use the term ‘savant’ in 1887 to describe persons with mental disabilities possessing exceptional but ultra-specific skills. Much later, the 1988 film-drama Rain Man with its portrayal of real-life American ‘mega-savant’ Kim Peek, played by actor Dustin Hoffman, similarly highlighted Peek’s stunning feats of memory whilst also exposing some of the neglect and severe isolation experienced by many with autism and related conditions. In altogether milder form, TV’s Doc Martin, as played by actor Martin Clunes, exhibits eccentricities and social inhibitions also common to an autistic spectrum disorder.

Though savants share autistic traits, they are by no means representative of the majority of those with autistic spectrum disorder. The defining feature of this group of ASD conditions is a crippling social withdrawal which Baron-Cohen1 et al. consider stems from the fundamental lack of a Theory of Mind. According to Eysenck & Flanagan2, this critical faculty is an essential prerequisite for the ability to recognise that ‘others’ thoughts and emotions … are different from one’s own’, and is also the mechanism used to ‘make predictions of how others will behave’. Describing the impact of such impairment on autistic children, Wellman3 concludes it ‘robs them of the ability to understand others’ feelings, desires, and beliefs. As a result, people can seem like any other object …’

Based on present understandings about the roots of ASD in biological toxins and problems surrounding birth which compromise brain development, the following diagram summarises the range of life-changing effects ASD can produce:

A Causal Framework for ASD
Inspired by Frith4 (2005) 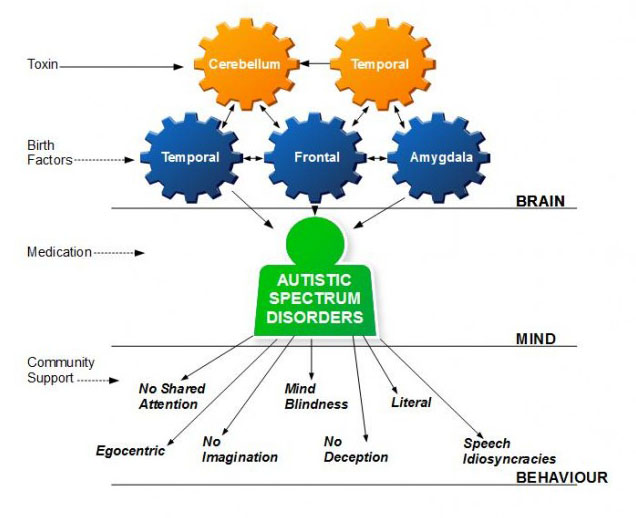 Just a glance through the above behavioural outcomes will show the difficulties children with ASD are bound to experience when they encounter typical early years educational provision. Here, teaching and learning primarily occurs as a social encounter which builds upon a pattern of developmental learning experiences reassuringly familiar to most children from their earliest days. However, those whose impairments fall within the autistic spectrum are simply not ‘wired’ to respond to such methods, and thus, as the following anecdotal reports illustrate, are more likely to exhibit unusual and altogether more unpredictable conduct within an early years setting:

If you would like to learn more about Autism and social interaction, read our article: Children with Autism and Social Interaction

The Triad of Impairments

Only as a result of groundbreaking work by Kanner7 and Asperger8 in the 1940s, leading to a reassessment of autism in the 1960s, has it become clear that ASD is not an emotional disorder but a physical one. Identifying this paradigm shift, Wing9 comments on the implications:

‘the behaviour of children with autism made sense if viewed as due to disorders of aspects of development starting from birth or the early years of childhood.’

Modern thinking recognises that the behaviour of all children with autism and its spectrum of related conditions is constrained by a shared triad of impairments as depicted below: 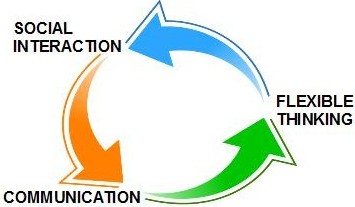 whilst Frederickson & Cline report that a consensus of contemporary opinion defines the disabling effects of this devastating trinity (for children) as an inability to:

Childcare professionals should be aware that the degree of impairment each child may suffer, and the type and severity of consequent behaviours which emerge, is so varied that individual assessment is essential. Though the tripartite symptoms are ever present, the balance of these features will determine the specific ASD profile which will be encountered: an (older) child with Asperger’s syndrome may superficially appear to be a high-achiever on some measures, whilst Wing notes that, sadly, ‘perhaps one in four or five of all those with autistic spectrum disorders, never speak, but remain mute all their lives.’

You can read more about the Signs of Asperger Syndrome in Children here.

ASD is often difficult to categorically diagnose and is very unlikely to be established below two years of age. Once a health-based assessment has determined there are ASD issues, behavioural programmes often form the basis of early attempts to improve targeted features of a child’s social, communicative and cognitive impairments. The procedure which may be used in an educational setting, for example to minimise screaming or aggressive behaviour which a child may pursue to achieve certain goals, is outlined in the diagram below: 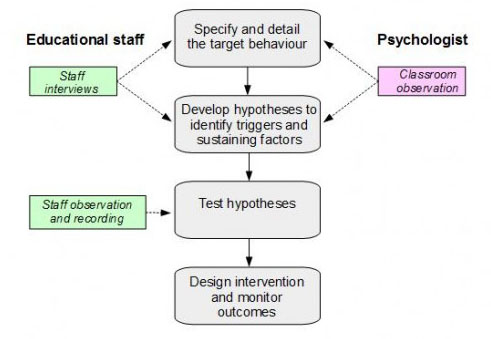 Siegel10 characterises the strategies driving such interventions as a series of questions:

Those who care for children with ASD will probably have heard many examples of echolalic language: an inappropriate echoing of a learned phrase which nevertheless serves a useful function. For instance, a child told to leave a door handle alone may immediately say: ‘Don’t turn the lights off!’ – which makes sense only if it is recalled that he was earlier told not to flick the light switch. Such phrases can get ‘stuck’, and even when inappropriate, come to be repetitively used as an attempt to communicate.

Howlin11 recounts how, following an initial period of observation and assessment, an intervention was used to reduce the occurrence of specific inappropriately formed echolalic phrases (‘Do you want to go out?’, ‘Would you like to go to the swings now?’). These were replaced with the more practical phrases ‘Can I go out?’ and ‘I want to go on the swing’. Data from the exercise is shown in the chart below to indicate the level of progress such intervention was able to achieve in just a few weeks:

Intervention to Modify Echolalic Responses
Howlin and Rutter12 (1987a) 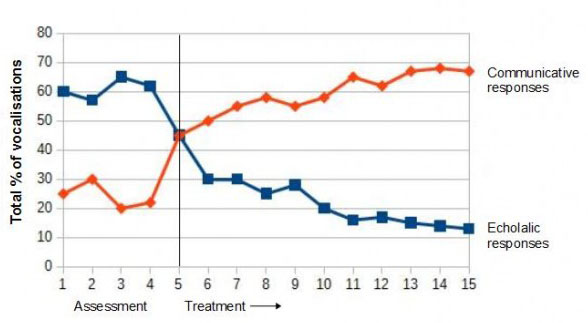 The Value of Early Years Experiences

Siegel, Wing, and many others highlight the benefits children with ASD gain from attending some form of pre-school unit and Wing believes that:

‘At this pre-school stage, mixing with children without disabilities often works well. There is no pressure to engage in tasks beyond the child’s capacity and very young children have not yet developed the strong group feeling that can at a later age lead to rejection of those who are different.’

Given that ASD behaviours only start to become apparent around the age that early years provision begins, it is clearly of paramount importance that all centres in both private and maintained sectors have secure systems in place to ensure no child showing early signs of ASD is ever overlooked.