What are Learning Difficulties? 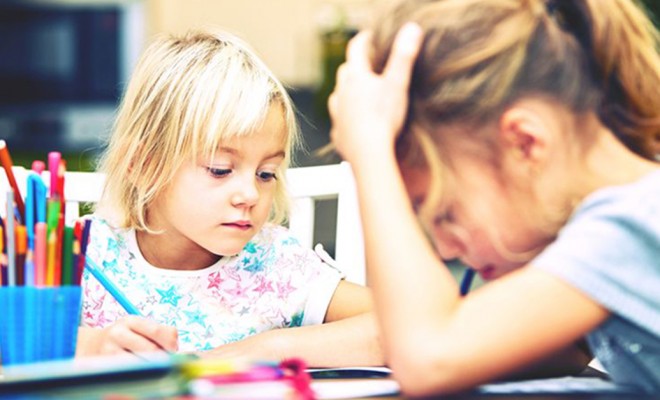 What are Learning Difficulties?

This discussion will focus upon learning difficulties in a broad sense, leaving dyslexia, dyspraxia and similar specific learning difficulties (SpLD) to be explored later in a separate review. The notion that a child may have ‘a significantly greater difficulty in learning than the majority of children of his age1‘ is a defining concept which successive SEN legislation has sought to address via different forms of special educational provision. Access to additional support implies that certain criteria have been met and some measurement of a child’s ability to learn is a key component of any process leading to a diagnosis of learning difficulties. This assessment has also proved enduringly controversial.

During much of the twentieth century, the ‘standard’ educational method used to determine a person’s learning proficiency was an IQ rating. This was calculated using a varied series of tests with the resultant scores then aggregated to produce an ‘Intelligence Quotient’. Central to this assessment is the idea that a ‘normal’ score of 100 would be gained by a majority of the population; most of the rest would cluster either side of the 100 ‘norm’; and only a few would score at a significantly higher, or lower, level. In statistical terms this produces a graph with a characteristic bell curve, shown below. 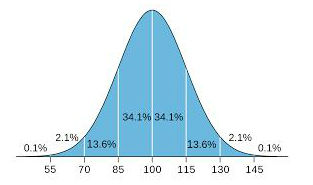 Though long used to measure intelligence and learning capacity, and firmly fixed in public consciousness as an indicator of ‘cleverness’, IQ tests have also had their detractors. Some noted that a single score culled from a series of tests created an illusion of scientific precision, whilst others argued that a test designed for one socio-cultural group should never be used to determine the relative intelligence of entirely different groups.

Whilst IQ scores reinforced the idea that intelligence is a relatively fixed, quantifiable feature, Gardner’s theory of multiple intelligences2 took the opposite view that an array of distinct mental abilities, where absolute correlations were rare, was a truer reflection of the distribution of intelligence throughout a population. Gardner believed there was no ‘single irrefutable and universally accepted list of intelligences’, but this has not prevented the core idea of his theory strongly influencing the educational curriculum, contributing substantially to the concept of personalised learning.

Dominant or preferred modes of learning have been described in a variety of ways – visual, auditory or kinesthetic3; left-brain / right-brain; reasoning and memory vs. perception; accommodator, converger, diverger or assimilator4; and many more. These concepts all imply there is no best method suiting all learners in all contexts, and many have gone on to argue too that a gross mismatch between learners and learning styles can be an often-overlooked reason for some degree of learning difficulty. Whilst cognitive/learning-styles theory has brought a more democratic and personal feel to educational learning, critics have warned that such well-intentioned labelling of a student as one fixed type of learner has the potential to cause, as well as solve, a number of problems in relation to an individual’s educational development.

You can find out more about cognitive development here.

Though they were initially barred from the formal education system until 1970 reforms, the inclusion of children with severe learning difficulties (SLD) actually helped to focus attention on facilities for learners classified as having moderate learning difficulties (MLD). A growing volume of research (e.g. Lindsay5 et al. 2006) demonstrates that MLD special schools, when compared with mainstream schools and special schools offering other types of SEN provision, contain students from certain social groups persistently over-represented in this type of institution, as shown below: 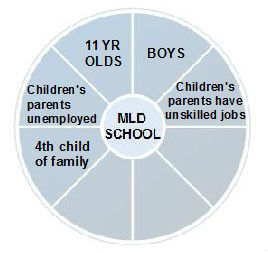 According to many observers, such statistical evidence leads to the uncomfortable conclusion that MLD has become a classification too-easily attaching to children from particular socioeconomic backgrounds. This criticism echoes the decades-old critique of IQ tests devised for white middle-class children and then used to determine the educational life chances of children from ethnic groups and similar. Whilst the seemingly inequitable MLD population mix is obviously hard to miss, it’s even harder to explain. As evidenced by the diagram below – Why can’t Jonny read? – inspired by Thompson6 (1988), any explanations attempting to shed light on MLD issues will tend to reflect the focus and concerns of the commentator, with teachers and psychologists homing in on personal and contextual elements, whilst sociologists point to macro-level injustices and inequalities. 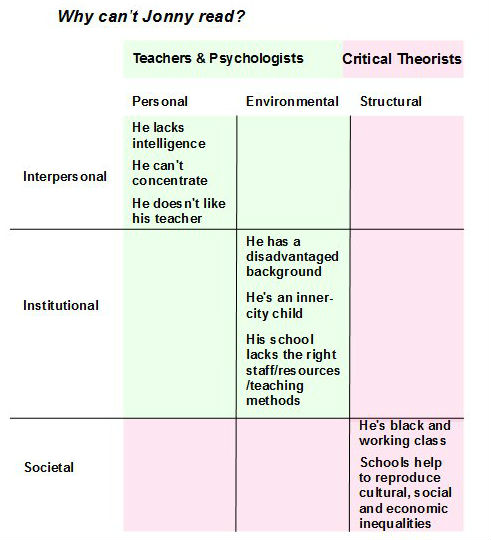 Assessment of intelligence: dynamism vs. inertia

A debate with continuing relevance for the assessment of learning difficulties is the extent to which intelligence is a largely fixed and static attribute, or a pliable and adaptable quality. Advocates of the former view tend to be seen as traditionalists with reduced ‘linear’ expectations for those with learning difficulties, whilst those favouring dynamic assessment appear to accept Vygotsky’s view of learning as a primarily social construct with the child as an apprentice-learner. Vygotsky7 described the initial learning stage as an adult-led encounter with appropriate ‘scaffolding’ to support and encourage the learner. This would lead on, Vygotsky believed, to a later phase where the child internalised the learned concept. Furthermore, Vygotsky’s idea of a ‘zone of proximal development‘, where a child feels confident enough to push boundaries and transcend the limits of his present learning, is entirely consistent with contemporary accounts of dynamic assessment more sympathetic to the notion of progression. Budoff’s8 work on learner classification to inform special education decisions is a good example of modern dynamic assessment principles. The appraisal incorporated a learner-coaching element and helped to maximise every limited-ability child’s potential via the adoption of three compassionately devised categories. Oozing encouragement, the category descriptors identified:

Whilst it is clear that children with SLD will require support, early intervention and perhaps special arrangements, from the outset, the appropriate educational options and menu of interventions for those with MLD are less easy to formulate. There is a contemporary view that MLD expectations have been too limited in the past, and the dialogue is now leaning more towards entitlement for learners with MLD. Frederickson and Cline9 summarise a powerful prevailing view thus: 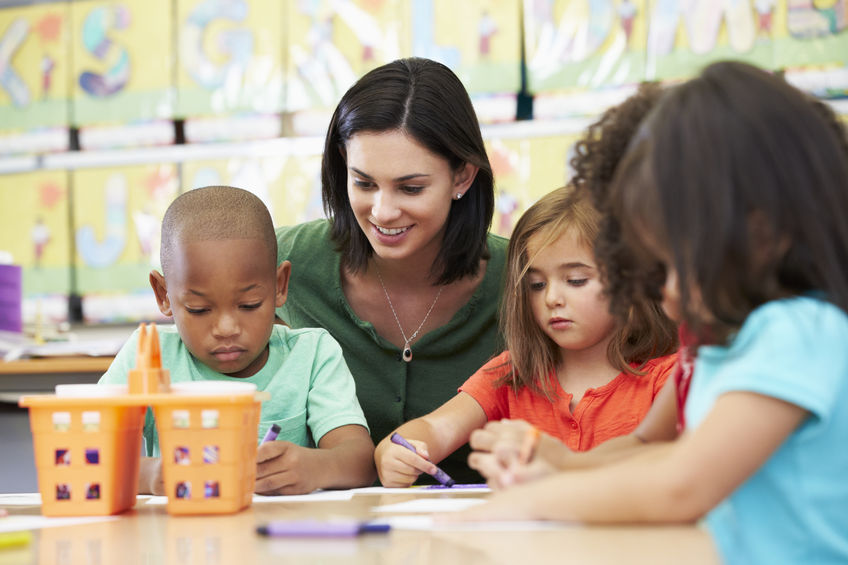 ‘… learning difficulty is partly determined by the learning context and cannot solely be understood as a fixed characteristic of the learner. For some commentators this has led to the rejection of the term learning difficulties altogether.’

Summarising the gains which can be achieved via modern dynamic teaching methods, Watson10 relates the stimulating learning experiences which can be anticipated:

If you want to learn more about the language used to describe learning difficulties, read our article: Special, disabled or just unique? Language can be important, but attitude is everything.