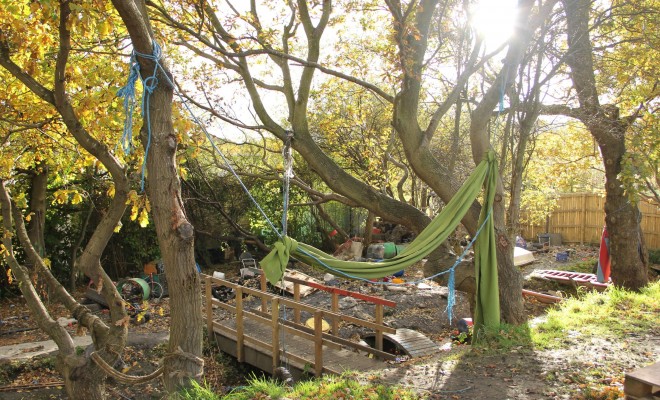 ‘She [Claire Griffiths, play manager] explains how the place works … how there are always three play workers present, but how rarely they intervene, leaving the kids to graze their knees, hammer their thumbs, singe their eyebrows, get stuck up trees, have quarrels and make mistakes, largely unmediated by the common sense of adults.’ (Morland, 2015, ‘Playing with Fire’)

The junk playground in Plas Madoc, North Wales, is known by everyone in the community as ‘The Land’. This fenced-off wasteland area of more than an acre, rarely visited by adults, is a space reserved for children to make their own by playing as they choose. Apart from the freedom this gives them, their potential play experience is constantly enhanced and revitalised by a stimulating carousel of bric-a-brac, old tyres, wooden pallets and other surplus materials, as well as sundry donated items. This junk material is further supplemented by sharp tools (knives and saws), hammers, ladders, ropes and much more. Play workers remain a low-key peripheral presence, seemingly disengaged, but actually fully alert to the evolving kaleidoscope of play activities developing all around them. Consequently, today’s children playing on The Land can enjoy something approaching the freedoms once enjoyed by generations of boys and girls:

‘… you may notice the pallets have been organised into mini walkways with entrances and exits way too small for adults. (It’s called the Shanty Town … and it’s temporary. Any child is more than welcome to come along with a hammer and smash it to smithereens.) There’s a small, red-headed boy swinging from a tree on a rope across the brook. In a far corner, children are sawing and banging, building a den around a tree. Another girl has a hose – she’s filling a canoe with water, just for the hell of it. A teenage boy sits in a shopping trolley, which two mates push precariously up an incline. Some other boys are ripping sheets of wallpaper to build a fire. It’s a playground, but not as we know it.’ (Moore, 2014)

The Land (2015) is a short documentary film about the nature of play, risk and hazard. The full video can be accessed here

The observation that children much preferred playing on derelict war-damaged sites rather than sterile playgrounds led Danish architect C.Th Sorenssen to design adventure playgrounds where, according to Sorenssen’s analysis:

‘The imagination at play should be that of the child rather than the architect’. (Kozlovsky, 2007)

Inspired by seeing Sorenssen’s Emdrup playsite in action during a childcare research visit to Denmark, Lady Allen of Hurtwood, a British architect and a lifelong advocate for children’s play, immediately saw rich potential in this alternative approach:

‘In a flash of understanding I realised that I was looking at something quite new and full of possibilities. There was a wealth of waste material on it and no man-made fixtures. The children could dig, build houses, experiments with sand, water or fire and play games of adventure and make believe.’ (Hurtwood, 1968)

Her professional colleagues noted that Marjory Allen, as she preferred to be known, regarded this new concept ‘not just as a framework for more empowering and democratic play, but as an alternative model for London’s post-war reconstruction’ (Froud, 2015). And, as Rosin observes, it is this post-war mindset which is the fundamental difference between these early experiments and The Land’s radical childcare initiative:

‘The playgrounds were novel, but they were in tune with the cultural expectations of London in the aftermath of World War II. Children who might grow up to fight wars were not shielded from danger; they were expected to meet it with assertiveness and even bravado.’ (Rosin, 2014)

In today’s very different society, Bilton and many others deeply regret what they regard as misguided attitudes shown towards pre-school children:

‘Children are not mini adults, they do not need to wear adult clothing, nor know everything that adults do …’ (Bilton, 2010)

And as early as 1982, Neil Postman was warning that such action would lead to children being effectively ‘expelled from the garden of childhood’. (Postman, 1982). Taking a sightly different tack, Cunningham believes modern children are viewed as ‘potential victims in need of protection’ and argues:

‘So fixated are we on giving our children a long and happy childhood that we downplay their abilities and their resilience.’ (Cunningham, 2006)

Many see the results of modern, fearful parenting attitudes as a serious dilution of the unique culture of childhood, and some believe too that parents who regard child-raising as a ‘project’ are part of the problem. Rosin, for instance, warns:

‘… the real cultural shift has to come from parents. There is a big difference between avoiding major hazards and making every decision with the primary goal of optimizing child safety (or enrichment, or happiness). We can no more create the perfect environment for our children than we can create perfect children. To believe otherwise is a delusion, and a harmful one … ’ (Rosin, 2014)

You can read more about hazards in childcare in our post: Risky Play- Finding the Balance Between Caution & Hazard 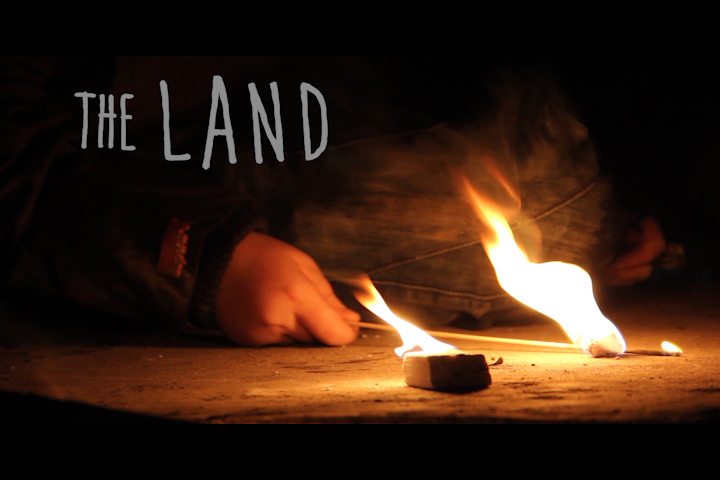 Lady Allen captured the essence of what today’s children risk losing in her oft-quoted remark: ‘Better a broken bone than a broken spirit’ (Hurtwood, 1968). It was her belief that children must be given ‘freedom to explore and experiment, and find out what the world is all about’ (Gill, 2013). As a result of personally confronting and learning to deal with the dangers and risks they encountered, they would gain the opportunity to grow and develop – a view which aligns with the above criticisms of contemporary childhood experience. Offering a modern philosopher’s perspective on our present-day perceptions of risk, Alain de Botton suggests:

‘It is only by reminding ourselves that the ultimate risk has already been written into the contract of life that we can stop being so precious about our own safety … It would help if more of us went into old people’s homes and asked the simple question: “What do you feel sorry you never tried?” The answers would frighten us … ’ (de Botton, 2015)

The Land’s obvious appeal to children from five years and upwards has helped to attract international media interest, and Polly Morland’s book, ‘Risk Wise’, includes a detailed account of its features. Eager participants, such as nine-year-old James, have been keen to share their experiences with the author:

‘What I do, jumping off something like that over there, that’s my favourite’ – [James points out a makeshift construction of ply, pallets, two oil drums and an old ladder] – and it’s scary when you’re on top, but I just think to myself, “Is that safe? Will I be able to make a perfect landing?” And if I don’t, then, well, I don’t do it.’

[James suddenly changes focus] ‘But this summer I want to climb up that tree.’ [He points] ‘That one. Because there’s not much branches up there, so it’s going to be hard.’ (Morland, 2015) 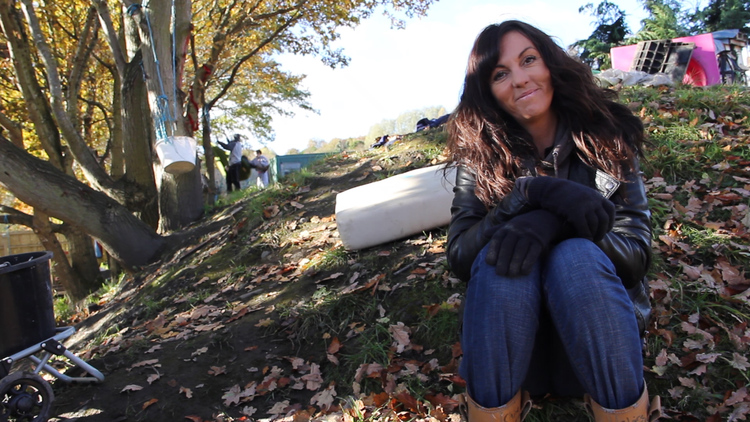 Claire Griffiths, play manager of ‘The Land’, is lifelong inhabitant of Plas Madoc

Fractured families bring just one more element to the complex mix of circumstances which leave modern children feeling under almost constant supervision. Following a bruising custody process, Wayne is now raising his own six-year-old son along with James mentioned above – to whom he is stepfather. Fearing possible abduction attempts, Wayne admits that, at first, he kept the boys far too close and had to be ‘converted’ before he could see things differently:

‘I wouldn’t let them play out. I wouldn’t even let them play in the garden … but the decisions I was making were incredibly unsafe for our long-term plans … it took me coming down here to understand how we can all become better people by playing a bit more and by learning to take a few more risks in life. The Land is probably the one place where James feels at home. It’s a haven really. It’s given him freedom.’ (Morland, 2015)

Manager Claire Griffiths, a lifelong inhabitant of Plas Madoc, summarises her own philosophy as regards this joyful and vibrant, if terminally shambolic, maelstrom of a play facility she endlessly monitors in this message:

‘Play should be everywhere – a natural part of life,’ she says, adding: ‘The Land is fantastic – but in an ideal world, there wouldn’t be a fence round it. Children would be able to do all the things they do there – without having to open and close a gate.’(Moore, 2014)
References