Signs of Dyslexia in Children 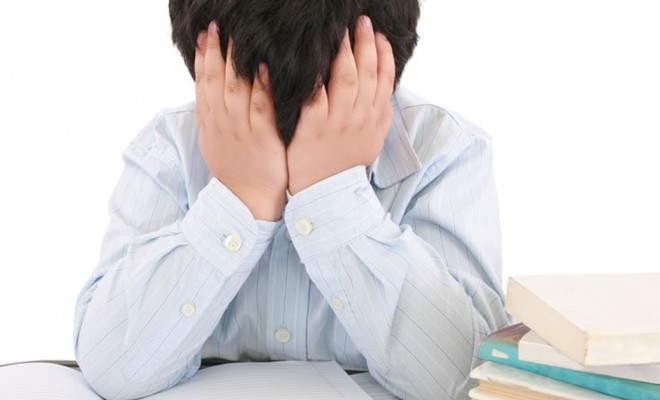 Signs of Dyslexia in Children

Dyslexia in children is one of the most significant barriers to literacy, causing distress and confusion to significant numbers of young children. Should anyone doubt the full educational implications, Walker’s1 summary covers some of the main points:

‘… the child may be branded “careless” or “lazy” … Yet he may make a valuable oral contribution, showing insight and a clear grasp of the concepts … He may be able to explain in graphic detail that he has just made a model aircraft carrier describing the guns, the flight deck, the radar scanning equipment but when asked to write, he is unable to express all this and so merely writes, “I made a bote.” Besides reading and spelling very badly, … he will have difficulties in … short term memory, organisation and sequencing … he is unable to recite the days of the week.’

Graphic designer Daniel Britton2, who also suffers from dyslexia, designed his own font to simulate the frustrating experience for those trying to read, in order to better inform those unaffected, explaining:

‘For most people with dyslexia, the letters and numbers do not jump around on the page and the colours remain the same … You can see the information, you can see each letter perfectly but there is something in your mind that is stopping or slowing the process of information.’

The British Dyslexia Association4 estimates that mild dyslexia affects around 10% of the population, whilst around 4% are severely afflicted. For childcare professionals, this translates as 2 in every group of 20 children showing some significant reading problems, with almost 1 in every 25 having a severe difficulty – reason enough to become broadly acquainted with this rather enigmatic condition.

Historical perspectives of Dyslexia in children

The timeline below traces the evolution of dyslexia knowledge and the emergence of different ways of conceptualising the disorder, and/or its effects on individuals: 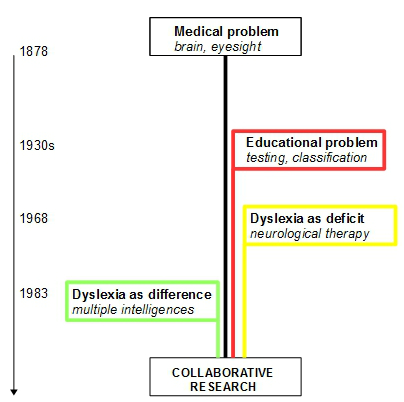 As Lawrence5 observes, dyslexia ‘is only one of many terms that have been used over the years to describe children with literacy difficulties’, and the publication of the DfEE Code of Practice6 in 1994 marked the first legislative acknowledgement of the condition. Though Galton’s analysis of individual difference in children’s academic performance (1869) raised awareness, it was not until 1878 that the neurologist Kussmaul first explored reading difficulties in the context of neurological impairment. Then, in 1887, ophthalmologist Berlin coined the term ‘dyslexia’, replacing the earlier description of ‘word blindness’. Writing in an 1891 edition of The Lancet, Dr Dejerne linked these same reading difficulties to the after effects of brain injury, a line of enquiry soon followed by many others.

The work of Hinshelwood (1900), a Scottish eye-surgeon, implicated congenital brain defects which impaired eyesight, and the American neurologist Orton (1925) noted the tendency for those exhibiting word blindness to reverse letters – for instance, turning ‘won’ into ‘now’ – using the term ‘strephosymbolia’ to describe this specific phenomena, and classifying children’s reading difficulties as ‘alexia’.

The input of educationalists

Reading difficulties were still overwhelmingly seen in medical terms during the 1930s, but at least educationalists began to discuss the matter and also published new teaching approaches suggesting how the problem might be addressed educationally. A growing body of academic literature indicated teachers and educational psychologists were taking ownership of the issue, but it was to remain the preserve of school medical officers to rule upon dyslexia and other learning difficulties right up to the 1970s.

A notable and effective teaching method to support children with dyslexic reading problems was designed by Gillingham7 and Stillman in 1936. Based on phonics (language sounds), this multi-sensory reading initiative coached children who first spoke the word aloud, before being guided to write it down, taught how to listen to the word, and then invited to model it in clay.

Inspired by the notion that dyslexia was associated with neurological deficits in the brain, Doman and Delacato (1986) devised a series of exercises which mimicked early child developmental events like crawling, stretching and balancing. Their premise was that a child with dyslexia was ‘learning-disabled’, meaning that certain essential developmental stages had not been satisfactorily accomplished, resulting in impaired physical mobility and therefore ultimately restricting access to language and communication.

After a prolonged period of physical exercise, Doman and Delacato believed a child’s natural hemispherical dominance would be reset and ‘neurological organization’ restored. Despite much academic controversy, the concept of revitalising neural pathways is still considered a viable approach to tackling learning difficulties, as exemplified by the work on neural deficits carried out by Dennison8 (1981) and Dore9 (2006).

Work by the British Psychological Society10(BPS) has drawn the various strands of deficit-hypothesis thinking together in diagrammatic form, and a simplified version is illustrated below: 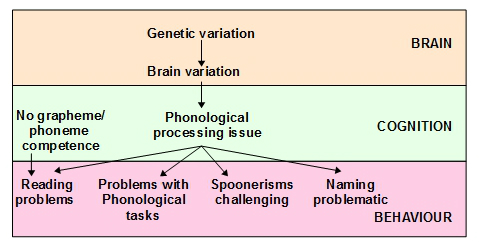 Howard Gardner’s11 theory of multiple intelligences, published in 1983, was instrumental in persuading researchers to consider the proposition that not all children would necessarily develop linguistic competence – that attribute being just one of a suite of human intelligences. In 1994, Galaburda’s12 adult autopsies provided supporting evidence for this view by showing that those with dyslexia also exhibited enhanced development of the brain’s right hemisphere. Given that the right brain is the area known to be associated with creativity and visual processing, this evidence implied those with dyslexia somehow compensated for possible left-brain limitations by increased right-brain activity.

Researchers, and much populist opinion, have often concluded that such re-routing of thought processes can help produce distinctively talented individuals whose impairment may even have contributed to their special output. The diagram below offers a sample illustration of those entrepreneurs, creative thinkers, scientists, and artists belonging to this category:

Building on the presumption dyslexia is not a deficit but a different way of learning, Silverman13 (2002) and Freed14 (1997), among others, have successfully proposed the idea that many children with dyslexia will learn best through methods employing visual learning styles.

The route to an advanced understanding of dyslexia has many fine examples of inter-disciplinary working. For instance, the advent of safe and reliable brain-scanning techniques has now revealed the parts of the brain typically employed by dyslexic and non-dyslexic readers, as depicted below: 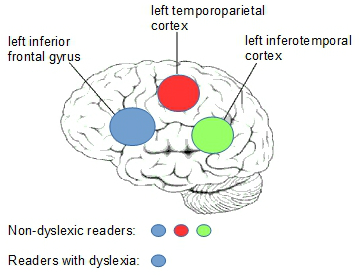 For the first time, this information clearly shows the neurological differences which occur between the two types of reader – validating the inferences made by many earlier pioneers.

Elsewhere, as the list below illustrates, the BPS have analysed 10 prominent modern theories of dyslexia to show that six still implicate some type of phonological deficit (i.e. a difficulty in processing the range of sounds which make up words and language) as a cause of learning difficulties (including dyslexia): 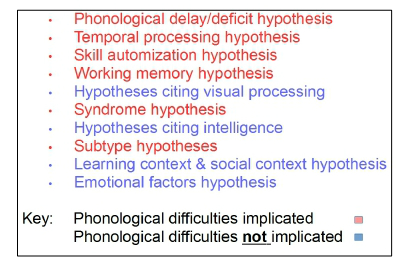 Another landmark outcome of the comprehensive BPS review of research was an updated and widely agreed definition of dyslexia. Reversing decades of negative ‘ruling out’ of all other causes before reaching dyslexia at the bottom of the list – an unforgivable approach which prevented early treatment and diagnosis – the new wording is much quicker and simpler to apply:

‘Dyslexia is evident when accurate and fluent word reading and/or spelling develops very incompletely or with great difficulty. This focuses on literacy at the ‘word level’ and implies that the problem is severe and persistent despite appropriate learning opportunities.’ (BPS, 1999)

Interactive research and dialogue is ongoing, and as controversial as ever: a 2015 study16 tracking 14,000 children looked at issues of visual impairment, finding that children with dyslexia had precisely the same incidence of eye problems as the general population. In addition, many children identified as dyslexic were also classified as having ‘perfect vision’.

Commenting on the outcomes, lead author and paediatric ophthalmologist, Cathy Williams said: ‘Some practitioners feel that vision impairments may be associated with dyslexia and should be treated. However, our study results show that the majority of dyslexic children have entirely normal vision on the tests we used.’

Whatever contributions future biological and neurological research discoveries may bring to dyslexia, it is almost certain the remedial help and practical support children with dyslexia receive will continue to be delivered by professionals in the educational domain.

If you wish to learn more about Dyslexia in children or want to know how you can assist a child who is affected by it, we recommend the following resources: