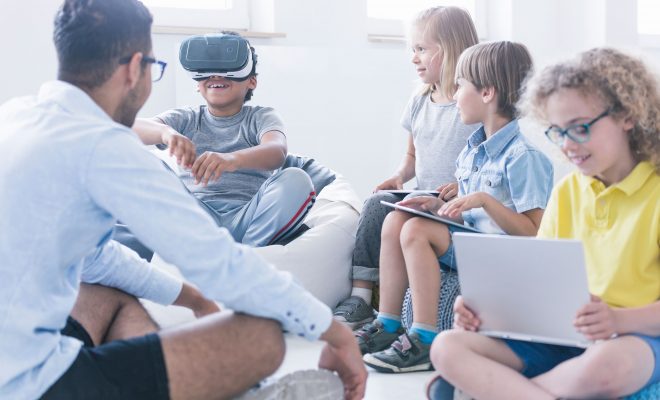 Since at least the 1980s “computers” have played some part in education. Yet while no one would claim educators have not moved with the times, digital technology could not yet be considered in any way mainstream in most early years settings. And while there are good reasons for ensuring a child’s physical and socio-emotional development is properly supported and we are never overwhelmed by screens and devices, some experts believe informal access to technology at a young age has already precipitated some learning changes.

The experience of all young learners is very different today. Digital technology has delivered them a new power over their own learning and they can now control their various learning experiences in ways we could never have imagined. But to understand this transformation, we first need to look at the key feature which has underpinned this shift – the world wide web.

Understanding How the Digital World has Developed

At first, stand-alone computers were something of an expensive novelty until web connectivity became a reality. From that point onwards, machines which could deliver information on demand (and their associated devices) have played an increasingly important role in all our lives. Figure 1 shows web development split into three phases: In simple terms, at the Web 1.0 phase we could look up information, while at Web 2.0 we could also upload content. Our current Web 3.0, described as the ‘executable’ phase, seamlessly blends previous capabilities – even in mobile mode – and adds the power and connectivity necessary for higher-order functions such as virtual reality and artificial intelligence.

We are now at Web 3.0, so even very young children can connect via touchscreen technology and also control other devices using voice commands. So it would be naive to suggest this is not transforming their learning experiences. In their own way, these youngsters are already beginning to benefit from the sharing and interactive options we all take for granted. Furthermore, as Karagiannidou points out:

‘… nowadays, possibly more than ever before, children of all ages are not merely consumers of knowledge, but rather contributors and co-constructors of collective experiences and meanings.’ (Karagiannidou, 2017)

What should also be remembered is that the home environment for young children has also been transformed by digital technology. Information and resources once exclusively available to childcare professionals can now be freely accessed by parents. In many cases, this has empowered and upgraded the role of parents and other family members as modern, informal pedagogues to the extent that, as Karagiannidou again observes:

‘…  children are immersed in experiences with digital technologies before their formal schooling years, and they come to school equipped with an already developing range of skills and experiences.’ (Karagiannidou, 2017)

Figure 2 below summarises these issues and suggests that the new functions and capabilities afforded by digital technology should be addressed on the grounds that they collectively challenge our concept of the ideal learning journey early years children should experience.

The Influence of Piaget and Vygotsky on Modern Digital Learning

Constructivist learning theories describe learning as a child-centred operation involving exploring and discoveries used to construct meaning. For Piaget, the child’s cognitive world was central to this function, whereas Vygotsky and others believed sociocultural influences were the primary drivers for the gradual internalisation of ideas and concepts.

Where learning is prompted by social contexts motivation is invariably higher, which immediately brings Vygotsky’s notion of the Zone of Proximal Development (ZPD) into play. This concept notes how learners feel encouraged to go beyond their present understandings, typically achieving far more progress in the company of a trusted adult (or older sibling) than they could ever manage alone – especially where the learning partner can guide the process by ‘scaffolding’ tasks (i.e. providing just enough support and advice to ‘prime’ the learner and thus encourage them to move forward).

A process akin to ZPD also occurs during peer collaboration and, as Karagiannidou describes, digital learning contexts are tailor-made for these types of interaction including (and perhaps especially) those which occur at home:

‘… they can provide learning opportunities that model peer-based collaborative knowledge construction, as well as collaborative tools and opportunities to promote not only cognitive scaffolding, but also affective or emotional scaffolding, by providing positive feedback which is either computer-based or user-generated and by sharing learning with others.’ (Karagiannidou, 2017)

As Figure 3 illustrates, five learning perspectives have been identified to show some of the ways in which digital learning occurs. While they may not all be ‘new’ in the sense that they have never appeared before, they do help to reveal some of the processes at work.

Situated learning, sometimes known as active learning, is an approach which encourages learning as a ‘hands-on’ experience. For learners this can be an intensely stimulating experience which, according to Collins & Halverson (2009):

‘… involves interacting with a rich technological environment such as a computer tutor or a game on the web and sometimes with other people by means of a computer network.’ (Collins & Halverson, 2009)

Sharing much in common with older forms of apprentice-based instruction, this again provides an insight into why young children learn so readily in a family environment where they are surrounded by people ready and willing to let them both observe and practise as a means of acquiring desirable new skills.

Participatory learning is broadly similar to situated learning but focuses more on the dispositions of the learner. Self-motivation is important here: Boys, for example, may care little for developing their reading skills until the material captures their imagination (super-heroes?) or contains knowledge which feeds into an activity at which they aspire to excel (football?). And likewise, in a family or similar context with strong social connotations, children are often self-motivated participants when they desire progression and recognition. Thus digital software packages which satisfy this need on-demand are always popular and successful.

Transformational play, experiential play and game-based knowledge acquisition are collectively derived from Kolb’s (Kolb, 1984) experiential learning theory which proposes a four-stage learning cycle. These three learning modes all prioritise playfulness, which is a recurring feature of of much learning that takes place in the digital sphere. Such approaches promote learner curiosity by encouraging exploration and communication, and by rewarding creativity. Typically, learners are engaged in real and/or virtual scenarios which may involve role play and generally cross traditional subject boundaries. Participation can involve making consequential choices and usually provides some degree of multi-sensory engagement.

It is sometimes said that knowledge acquired through computer-gaming, for instance, is not readily transferable. But that fails to answer questions such as: Does a game like darts build and support excellent numeracy skills? Or is darts success the sole preserve of confident mathematicians?

Is Digital Technology Now the Gateway to Personalised Learning?

Though educators invariably do their best, staffing levels make the achievement of truly personalised learning tailored to the varied needs and diverse interests of all children a somewhat unrealistic goal. Yet Kucirkova (2018) recounts the positive learning effect of such an approach, as exemplified in a Dutch study which focused on a museum visit:

‘Children were divided into two groups and were asked to select the content on their own. In one group, the children were given the option to follow their own (personalised) route through the museum and in the second group, the children followed a route that didn’t contain their favourite objects. [Though each group were unaware of the differing options] … The children who could choose their preferred subjects scored higher on the tests evaluating their understanding.’ (Kucirkova, 2018)

Kucirkova defines children’s agency as ‘the extent to which children’s engagement is determined by them rather than anyone else’. And as a more detailed example of such personalisation in operation, Kurcirkova quotes the comments of a teacher involved in the study:

‘… we take inspiration from the children’s interest first, so we have got an awful lot of boys in school which is why we’ve got the cars – the electronic cars – and why we’ve been reading about owls. So we’ve been finding out about what they eat, [and] we’ve been cooking worms for snacks. [We are] trying to inspire the boys and [fire their] imagination … all the time, [we ask] what are their interests? What do they enjoy doing?’ (Kucirkova, 2018)

The learning perspectives discussed earlier all work well in the digital realm because, as Karagiannidou observes, digital platforms:

‘… invite the integration of individuals and collaborative learning and encompass the role of educators, pedagogues and families in supporting children to engage with formal and informal learning communities.’ (Karagiannidou, 2017)

Expanding on this theme, Karagiannidou illustrates some technologies, tools and learning experiences now available which support individualised learning, while Kucirkova reminds us that ‘mobile technologies can [also] be used for learning analytics’. As shown in Figure 5 below, such ‘technology-infused’ elements carry the potential to ‘encourage engagement, active learning and creativity, and support social interaction.’ In practice, ‘blurring the line between formal and informal learning.’ (Karagiannidou, 2017)

Karagiannidou’s rationale concerning the need for such new forms of learning and teaching is best expressed in her own words:

‘It is argued that learning, working and living in a digital era creates the need for but also supports a set of skills that is moving from individual expression towards community involvement, where children, supported by adults and peers, negotiate their learning, their identity, role and citizenship in global, networked communities and cultures of learners. This set of skills includes … collaborative problem solving, multitasking, collective intelligence, the ability to search, evaluate and synthesise information, as well as [the skill] of negotiation in the sense of experiencing, discerning and respecting diverse communities, cultures and perspectives.’ (Karagiannidou, 2017 – informed by Jenkins et al., 2009)

Reading the above (in the spring of 2020) instantly triggers two thoughts: Greta Thunberg’s climate initiative and the Covid-19 pandemic!

There is a growing body of evidence to support claims that the new modes of learning digital technologies now offer can make an important contribution to pre-school children’s cognitive- and social and emotional development.

However, where access and connectivity goes largely unsupervised, conflicting evidence also shows that risks such as child obesity, impaired language development, and behavioural and socio-emotional issues can be very real. It has also been suggested that, for some children, the over-extravagant use of animations may even impede their understanding.

Other practical limitations include:

Nevertheless, provided digital initiatives are carefully matched to the needs of the learner and deployed within appropriate models of early years practice, these tools have a rich potential to enhance contemporary teaching and learning for the benefit of all.

Stephen and Edwards (2018) sum up the need for the early years sector to engage with the implications of the new digital technologies as follows: