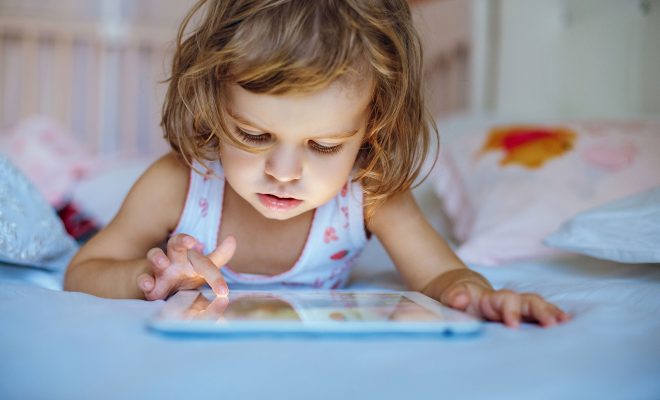 Even the very young seem digitally fluent, born ready to embrace a digital future. Technology writer Daniel Booth’s observation is typical: ‘I showed my little boy [not yet three] a copy of “The Times” and he tried to swipe the pages and tap the headlines.’ (Booth, 2020)

Yet in a similar vein, child psychologist Alison Gopnik (now a grandmother) recalls her own ‘obsessive’ early years behaviour as follows:

‘My … childhood was dominated by a powerful device that used an optical interface to transport the user to an alternate reality. I spent most of my waking hours in its grip, oblivious of the world around me. The device was, of course, the book.’ (Gopnik, 2016)

Some may want to dismiss this observation as not really comparable with contemporary technology devices like tablets and smartphones which now seem to demand as much, if not more, of a young child’s attention. But Gopnik has no doubts about the impact of her own experience:

Those who likewise recall being avid childhood readers just might have to accept the parallels between such behaviour and the fascination tech gadgets hold for even the youngest early years children are uncomfortably close. However, Gopnik has never felt impaired by her early ‘fixation’:

‘… this early immersion didn’t hamper my development, but it did leave me with some illusions—my idea of romantic love surely came from novels.’

So how should we as modern parents, caregivers and educators respond to our children’s fascination with all things digital? With limited research to fall back on and new technology emerging at a frightening pace, it’s not always easy to find a consensus. Some suggest we may be ‘trying to hold back the tide’ (Cowley, 2019), while others don’t buy the need to throw over all the good work that goes on in the childcare sector to give pride of place to johnny-come-lately tech devices like the hand-held tablet – pointing out, for example, ‘… there are other valuable experiences … readers get from handling and navigating books that you cannot get with technology.’ (Bryce-Clegg, 2019)

The Impact of Technology

Both education and psychology have spent decades researching the impact digital technology seems to have on our children. However, most of the work has focused on school-age children. There are good reasons for this: it’s much easier to quantify the outcomes when children can give reliable verbal responses, and when teachers and other adults can contribute further perspectives to validate the findings. As a result, questions about children being digitally fluent have primarily been addressed by authors from these twin sectors.

However, it’s plain to see even small children can now access and operate computers via speech, touch and visual cues – and they don’t have to be able to read or write. That allows new generations of toddlers to ‘hit the ground running’ in terms of technological facility. But just as importantly, as many researchers are becoming aware, the implication is that the brains of these ‘pre-literate’ youngsters may process information in entirely new ways. That’s why, as Figure 1 illustrates, the field of neuroscience is now providing researchers with valuable new perspectives, helping to track the connectivity which exists between body and mind, physiology and psychology. And new discoveries are giving experts new ways to examine how infants and young children learn from their earliest days.

Alison Gopnik, who first dubbed the newborn baby ‘the scientist in the crib’, leads a US research team who have demonstrated how many of the methods pre-school children use for informal learning mimic the techniques used in artificial intelligence and machine learning. Discussing how children employ Bayesian inference (whereby an individual compares the strength of new evidence against their existing hypotheses), she reports:

‘… children can make surprisingly accurate inferences about … abstract cause-and-effect relationships. Causes can bring about effects in different ways, which we can describe using the “Boolean logic” of computer programmers. For example, a machine might work with an “OR” operation: a block either activates the machine or not. Alternatively, it might use an “AND” operation: it takes a combination of blocks to make the machine go. Preschoolers can learn these abstract principles from statistical patterns. Sometimes they do this better than adults. Bayesian models can predict just how four-year-olds master this basic computer programming logic.’ (Gopnik, 2017)

How Children Adapt and Learn

According to Italian neuroscientists who first identified them, mirror neurons are distinctive types of neuron which fire when we observe a motor act performed by others. But the most interesting part of this revelation is that these same motor neurons fire again, and in the same way, when we try to imitate that action for ourselves. And furthermore:

So while Piaget (1936) argued persuasively that children were born equipped with a predisposition to learn to survive, the identification of mirror neurons has helped us understand more about precisely how such adaptation occurs:

‘Babies and young children actively interact with their environments and build concepts about the world around them based on their observations of others and their own physical explorations.’ (Spawls &Wilson, 2017)

In 1966, Jerome Bruner also suggested how children’s cognitive development could take initial imitative learning and develop it to create more complex forms of thinking. Bruner’s three modes of representation, depicted in Figure 2 below, are a particularly useful way to conceptualise the progressive learning process which ensues when young children are given access to technology devices.

This is especially true with touchscreen technologies where, as the diagram comments outline, Bruner’s modes can be used to describe a hierarchy of interaction: During the ‘enactive’ mode, because no mouse/keyboard interaction or literacy skills are demanded, even the very young can engage with a tablet computer at a kinaesthetic/sensory level. Then, as verbal/spatial understanding increases, the more visual ‘iconic’ learning mode appears. And finally, as early learning becomes better understood and encoded, a more sophisticated ‘symbolic’ mode of learning can finally get underway.

Inspired by O’Connor (2017), Figure 3 maps touchscreen tablet interactions in a little more detail to outline how young children are likely to use such a device at different stages in their development.

Vygotsky’s sociocultural theory (1962) proposed that children learn through interaction with others, and that this is facilitated by the use of ‘cultural tools’. While the nature and scope of these tools will vary across different societies, in the advanced Western world educationalists have long considered language and reading & writing to be critical tools required for broader learning to begin.

History tells us there was a time when reading & writing skills (and thus access to a broad education) were the preserve of a privileged few. But could technology devices operated via speech, touch and visual cues eventually downgrade the importance of reading & writing to be one day supplanted by an ultra-democratic ‘technological facility’ as a new cultural learning tool? Sue Cowley, author of ‘The Ultimate Guide to Mark Making in the Early Years’, offers a nuanced response:

‘I think we are already seeing the early signs that handwriting itself will eventually ‘evolve out of’ usage … but I think we are probably looking at a timescale of a century or so rather than a few decades … I don’t think we will ever completely lose reading and writing though, because right from the earliest times humans have made marks as a way of communicating meaning – losing handwriting is different to losing writing.’ (Cowley, 2019)

Though the premise of this article is that even the youngest children seem ready and willing to embrace a digital future, this does not mean the responsible adults in their lives have no role to play. Nor will it diminish the anxiety many feel about the impact technology might have on the very young when their brain development is at a very impressionable stage of ‘plasticity’.

Can an app, avatar or 3D cartoon really simulate or distort human nature? Will too much time spent exploring cyber-simulations impair real-world, pre-academic groundwork in areas such as empathy, social skills and problem-solving? What about those who max out on interactive apps, in which objects appear, explode, reappear and ignore the rules of the physical world? How does looking at a tablet screen impact upon an infant’s eyesight? These and dozens more awkward questions continue to be a concern, because (as Figure 4 acknowledges) access to technology can have its downside too.

While there are plenty of dilemmas, adults should remind themselves the same concerns apply to many toys, books, TV, films and similar media. New technologies may present things in novel ways (which is part of their attraction), but the underlying supervisory and access decisions are often very similar.

Many experts echo these thoughts:

‘It is too binary to say that all access to technology is either good or bad’. (Bryce-Clegg, 2019)

‘… it is what children and adults do with the device that shapes how beneficial the resource is’. (Arnott, 2019)

‘… what really matters about screen usage is content and context.’ (Cowley, 2019)

And whilst the American Academy of Paediatrics used to recommend strict restrictions on ‘screen time’, their new guidelines (Shifrin et al, 2015) now emphasise that what is really important is what children access, and with whom.

Setting an Example for Children

Used wisely as part of a balanced lifestyle, good technology access could become an acceptable way to fast track young children’s early learning. However, so much will depend on the home environment and pre-school learning facility:

‘… it is the way that parents, adults and peers support them in their negotiations with such technology that will determine the type and degree of influence that it will have in their lives and development.’ (Spawls &Wilson, 2017)

Furthermore, as regards technology (among many other things), remember children will always take their most-important cues from what adults do, rather than what they say. So if in the course of a family holiday or on a long car journey you use a smartphone:

Just don’t be surprised to find your youngest children desperate to acquire their own personal devices, which they – and Vygotsky – will naturally see as the ‘cultural tools of their generation’.

So it appears our infants are not simply ‘born to learn’, they are born predisposed to take advantage of the learning environment technology can offer even before they can read, write and make themselves verbally understood. And as they progress along their learning journey, it’s becoming clear their developing powers of reasoning are more developed, and more closely aligned with digital logic, than we may have realised. In addition, they have entered a world in which digital devices are everywhere, and ownership of personal, hand-held devices is either considered a must-have necessity or a sought-after privilege. So why should we be surprised to find our babes-in-arms are rapidly becoming digitally fluent and just brimming with cyberworld potential?

The real question for us all is: What should we do about the potential for harmful over-immersion?

To a degree, all media has the potential to carry users away to ‘alternative realities’ – just ask Alison Gopnik! Responsible adults can determine the degree, nature and duration of a child’s access and exposure to technology and devices they consider appropriate – always bearing in mind they cannot simply prevent youngsters having a digital future without causing them harm. What is essential is that children are happy, attached and well-grounded in a loving environment. That is the true, supportive reality, the centre of their universe to which they will always want to return once their digital adventures are done.

Related Items
← Previous Story Social and Emotional Development
Next Story → Digital Literacy: What Does it Mean to be Literate in the 21st Century?